Next stop is the local pub Jason has in mind for lunch, Huntingfield Arms.

It has a lovely bar and separate restaurant and is a listed building grade II. It was originally the estate manager’s house for nearby Heveningham Hall.

Pubs in England are quite different from a lot of pubs in Australia – I guess the weather has a lot to do with it. A typical country pub in England has a warm, inviting atmosphere and there appears to be no pressure or indeed desire for anyone to become intoxicated. There’s a lot of leisurely chatting and sipping wrapped in a layer of conviviality that is quite foreign to the average Aussie pub. And Aussie pubs smell. They smell of stale beer with a hint of urine and a soupçon of vomit for good measure. This pungent mix simmers in the midday heat and causes passers-by to almost faint from the stench……unless they are drinkers – in which case they don’t seem to notice.

Amazing! How can they not notice? I guess it’s similar to smokers who have a quickie in the loo then try to look all innocent when they come out. They’re the only ones completely oblivious to the cloud of cigarette smoke that surrounds them and the cigarette breath they’re breathing over all and sundry. What? Me? Smoke? Never! 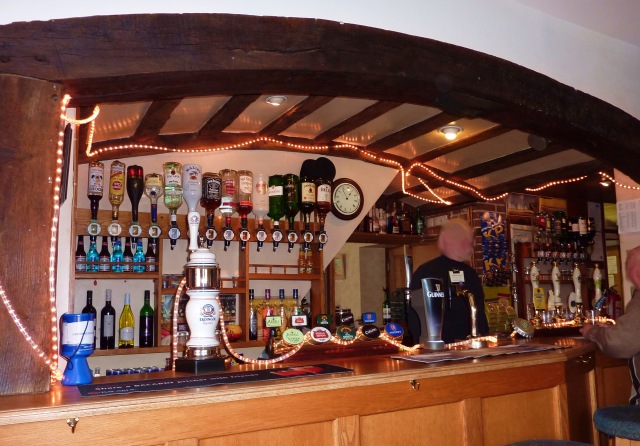 Anyway…back to English pubs… and in particular the Huntingfield Arms. It appears that, especially in the middle of the day, NO-ONE is there to get drunk.

The meal was very good – lamb shanks and veg – but of course I’d had so much food in the past 24 hours that I looked with horror on the gigantic plateful they’d just given me.

Jason and Sue had eaten a meagre breakfast in their van while I had tucked into cereal, bacon, eggs, sausage, tomato,toast, jam and numerous cups of tea at my B&B and the thought of food was nauseating. I bravely ate a few mouthfuls and moved the food round the plate from time to time but, in truth, ate very little. Jason, fortunately, has hollow legs so he was happy to polish off the rest of my lunch.

The afternoon was spent happily wending our way through the tiny villages of East Anglia and I was struck, yet again, by how time-consuming it is to see all that there is to be seen in England. Around every corner there’s a new surprise, a wonderful story to be told whereas back home you can drive through mile after mile of never-ending sameness and discover little about its history.

We drove back through Bramfield and I photographed the crinkle crankle walls on our way to Aldeburgh where Jason and Sue were to spend the night near the yacht club.

The curves are not exactly uniform in this example!

I found the crinkle crankle walls quite attractive – they snake their way along for great distances. Apparently the Dutch brought the idea over with them when they came to drain the fens. The walls can be just one brick thick and cover long distances without the need for bracing as long as they incorporate the semi-circular curves along their entire length.

As the afternoon wore on I decided I had to take some steps to find a room for the night. Sue and I found some B&B ads in a shop window and on phoning one of them in the next village, Snape, I found there was a vacancy.

Having booked another B&B I could relax again and we set out for the ‘beach’ at Aldeburgh to have a look-see. When we arrived, in the spirit of being a genuinely flexible visitor, I had to dramatically alter my definition of ‘beach’ …….. but more of that later!

keep calm and carry on... cooking

My photography mostly... Do you see what I see?