8. ‘Home’ for a weary traveller 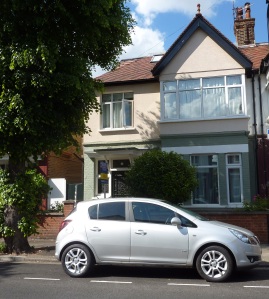 Parkd outside the front door – at last!

So there I am, at 10am, knocking at the door of my new London ‘home’ looking forward to some long overdue rest.

Now, previously, a flurry of emails had passed between the home owner and myself about my early arrival and I was under the impression that this was quite acceptable to her.

For whatever reason there seemed to have been some misunderstanding about the subject and when the owner finally came to the door looking very hot and bothered she said I was not expected this early and could I come back later as the place wasn’t ready. I was greatly disappointed as I was looking forward to putting my feet up and getting some rest as I’d had only 2 hours sleep in the past 37 hours and was starting to feel a bit the worse for wear.

I managed a weak smile however and said I’d be back later….. in an hour or so.

My mind went slightly numb at the thought of having to aimlessly fill in 3 hours but I nodded glumly, decided to give it my best shot and headed off for the local shops.

As it turned out, the time was useful because I wanted to buy a mobile phone as soon as possible and I also needed local currency. After sorting these out I went to the supermarket for a few provisions and, realising I still had a couple of hours to fill, I sat down at the local café and ordered food and drink – I can’t even remember what I had – I was rapidly falling into a stupor as the adrenaline surge of my arrival wore off.

I do remember a few things about this event though.

I sat outside the cafe which was in a pedestrian mall and after some time became aware that the three young male staff – who were all good-looking with what we used to call ‘swarthy’ complexions – appeared to find me very interesting. At my age it had been a long time since anything like this had occurred and I found myself sitting up a little straighter, tidying my hair and generally aiming to look a little more fetching than I obviously already did.

I dallied over my drink and food but there was no way I could stay there for another hour without falling asleep so I made up my mind to go back to my house and, if need be, sleep outside in the car.

I slowly gathered up my purchases from the morning and made what I thought was a very satisfactory exit from the shopping centre and was sure that those 3 pairs of eyes were following my every move. I felt very happy with the situation as I strolled past a lovely church next door and was trying to remember where I’d parked the car when I heard someone call out  ’M’am’ behind me.

I swung round to find that one of the swarthy young chaps was running towards me up a slight incline – what could he want – surely he couldn’t know who I was.

‘Excuse me, M’am’ he said, puffing.  ‘You left without paying your bill.’

I wanted the earth to open up and swallow me.

What a stupid, conceited fool I’d been. Of course they didn’t find me interesting; they were keeping an eye on me to make sure I didn’t leave without paying the bill. God, how embarrassing.

But how could this happen?

As I stammered apologies and hurried back in to pay my bill it dawned on me that back home we do things differently at cafes. We order the food, pay for it and THEN sit down to eat.

In my semi-comatose state I took it for granted that as I was finished the eating phase I must also have completed the paying phase. How could I explain all that though, coherently and convincingly, to 3 chaps whose grasp of the English language was a little shaky. I felt utterly mortified and after paying and mumbling further apologies I made a very hasty and red-faced exit the second time round.

I was now at a point where I felt that if I didn’t lie down I’d fall down. I wandered slowly back to the car and drove as slowly as I dare back to the house. English drivers have no patience whatsoever with a slow driver so I trod a fine line on the way back. It didn’t take long to reach ‘home’ and I was determined to stay, even if I had to camp in the car outside the house.

However, much to my delight the owner  was ready for me to take up residence and in no time at all I had my luggage out of the car and inside and she was showing me around a rather lovely apartment which was quite modern with a pretty garden out the back – and I had it all to myself.

As she was showing me how everything worked and where the spare sheets were – I was renting this place for a month – I prayed that we would finish soon and I’d be free to crash on the bed; never mind any unpacking.